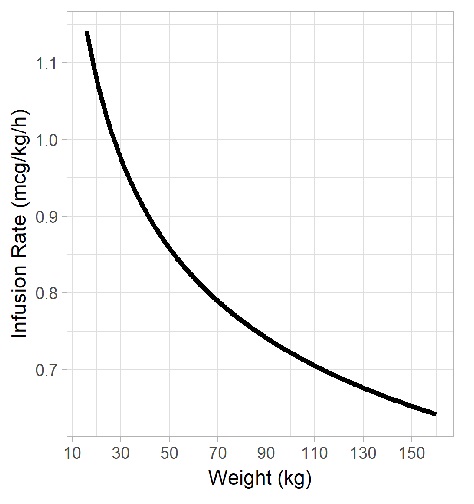 Differences in fentanyl pharmacokinetics (PK) between obese and nonobese adults have previously been reported; however, the impact of childhood obesity on fentanyl PK is relatively unknown. We developed a population pharmacokinetic (PopPK) model using opportunistically collected samples from a cohort of predominately obese children receiving fentanyl per the standard of care. Our analysis included 32 participants ranging in age and weight from 2-19 years and 16-164 kg, respectively.

Using our developed population pharmacokinetic model, we created a rational strategy for dosing fentanyl via continous intravenous infusion in obese children that maximizes the probability of achieving steady-state plasma concentrations within an analgesic concentration range (1-3 ng/mL). The manuscript was published in The Journal of Clinical Pharmacology.